A few days ago, the good old “VideoLAN must use HTTPS” topic came back, in the form of a bug report. However this time, discussion heated up way above proportions on twitter, so I’d like to take a step back and address what’s the status (or rather, my own view on the status) is.

Speaking of views, this post is about my view and understanding of the topic, and mine only. This is not a VideoLAN statement, this is just how I understand things, and why I believe the answer to the everlasting question “Should VideoLAN enforce HTTPS for all their downloads” is the most common answer in IT: “It depends.”

The base statement is “if you don’t enable HTTPS anyone can Man In The Middle attack your connection and replace your VLC install with a malware”. The first part is true, the 2nd is much more complicated.

I kind of feel obligated to comment on the bug report part about the lack of HTTPS being how the CIA used VLC to take control of computers . The answer here is much simpler: this is false.

They used the application manifest to force a malicious DLL to be loaded instead of the system provided ones. The VLC installation was provided on a USB key, and to be honest this is not much more different from simply recompiling VLC with whatever extra code you want, since you rely on the victim trusting you and wilfully executing the binaries your provided them.

In short, we mitigated this attack vector by:

The first part is interesting, because now the manifest is part of the final executable, meaning one needs to modify the binary to change it, and this is important, as you’ll see below.

But let’s go back to the HTTPS topic

It is indeed true that using HTTP is insecure. I don’t think anyone argues on that part. You’re sending stuff for the whole world to see, and potentially intercept and edit.

It is also true that our frontpage doesn’t enforce HTTPS by default, and that Google doesn’t redirect you to the HTTPS page. We are investigating the later, the former is complicated due to old browsers, which we still have to support (you’d be surprised how many Windows XP users we still have)

However claiming that videolan.org doesn’t support HTTPS would be wrong

In anycase, there is no arguing that enabling HTTPS everywhere would be a good thing. The sad part is, we can’t.

VideoLAN relies on mirrors to allow us to handle the bandwidth required to distribute VLC. There is no way we could do that with our own infrastructure, based on donations only. Those mirrors are gracefully provided to us for free by some companies (and we are very grateful to them!), but we do not own the machines, nor are we in a position to make any kind of demands to them.

Some people suggested that we use Cloudflare, but that is not an option, as they are US based, and must therefore comply with US laws, which has a different view on software patents than Europe. If we were to switch to Cloudflare, and they were required to stop hosting us, we’d have no way to provide VLC to our users, and no mirror infrastructure left. This is not an option. Oh and the hypothesis of having a mirror shutting down because of legal heat is not an hypothesis, it already happened.

But ok let’s say we have all our mirrors switching to HTTPS. Actually quite a few of them already are (and we are, again, very grateful to them!), but we don’t control what gets out of the mirror.

Our mirror system (mirrorbits) already take quite a few actions to try and ensure the proper files are being served:

If we detect something dodgy, we will remove the mirror from our ring for some time, or potentially forever.

But a rogue mirror could still decide to serve you the file it wants while reporting something different to mirrorbits (spoiler alert: it happened). So even with an HTTPS mirror you can get a malicious file (but hey! It has a green locker!). This is not something mirrorbits can ensure, and not what it was made for. This is why we chose to focus our security measures on the binaries being downloaded.

All our binaries are signed with both GPG, and our Authenticode signature on Windows, our Gatekeeper signature on macOS.

For those who are not familiar with Windows/macOS, Authenticode and Gatekeeper are basically the operating system provided way of checking the authenticity & integrity of a binary.

From there, multiple configurations are possible:

On First install: it is the operating system’s responsability to ensure the binary is signed, and matches our signature.

If the Authenticode signature matches, then all is good! You can see that it is being distributed by VideoLAN, but more importantly, no warning, nothing worrying. 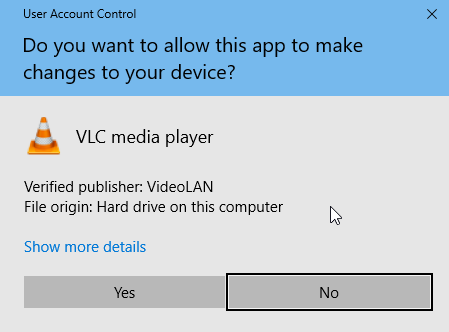 However, if the binary has been tampered with, you can see & feel the warning instantly. So if you were to modify a few bytes of, let’s say the application manifest, you’d get a nice warning telling you this is unsafe. 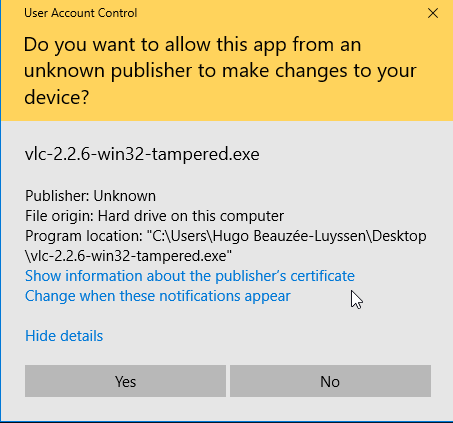 And if you’re running an unsigned binary, you have to actively want to run it, as Windows won’t let you do it by default

This leaves us with those possibilities:

You could argue (and I believe you’d be right) that the signed but tampered warning could be more extreme, but we sadly can’t control that.

I don’t have a macOS computer at hand, but I believe the output to be quite similar.

When it comes to the updated, it will check for the GPG signature (the public key is embedded in the VLC install). The updater will refuse anything that is:

That makes an HTTP download completely safe as far as I can see.

So the only pertinent attack vector would require the user not to know which version they install (that is not unlikely), but also to refuse update checks, or the update offer that will pop on first launch if they do accept the check.

I will emphasize that we do not require the user to explicitely check the GPG signature nor the Authenticode/Gatekeeper signature. The updater/installer will do it for them.

However as described earlier, there is still a small attack vector left, between the first install and the second launch, and we need to address this at some point. Now keep in mind that due to the mirrors not being ours, we still can’t enforce HTTPS. However we could rely on another mechanism. I strongly encourage you to vote for this (very old) suggestion on Mozilla’s bugtracker:

This would allow us to provide our checksums (which is ultimately the best way of ensuring that a user downloads the correct version, HTTP or HTTPS, provided that the checksums gets distributed over a secure connection). We can’t expect a user to know about checksums (some do, and that is great, but most don’t). We can, however, expect software they use to do so.

There is also an obvious thing we can all do, and that is to educate users about the importance of updating. We also have to do our share to ensure there aren’t too drastic regressions from a version to another.

I believe VideoLAN is working hard on those matter.

Hopefully that sheds a bit more light on the situation, and will help move away from the “No HTTPS means total unsecurity” point of view. I agree that in a perfect world, we’d deploy our own servers worldwide, would enable HTTPS for all, but we can’t.

Someone said today that “Google moved to HTTPS only at no impact to their capacity”. I’ll glady point you to the fact that Google is not a non-profit, and that the amount of money they make in a day is an order of magnitude (hello understatement!) higher than the amount of money we ever received from donations. Ever.

A few closing remarks, in no particular order, from what I read today: